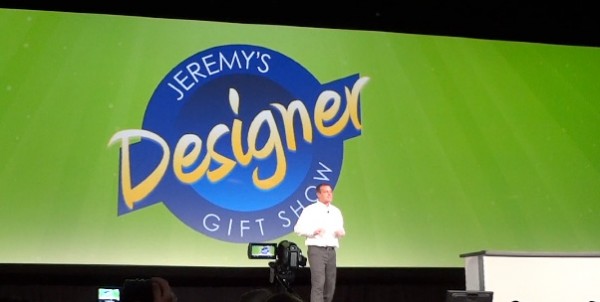 Every year at SolidWorks World during the Wednesday General Session, users get a preview of what is coming in the next version of SolidWorks.  Its an event that many look forward to and is a great way to cap off the week.  So…here we go!

As in past years the new features were presented in the form of a skit.  This year’s skit was “Jeremy’s Designer Gift Show” which was a parody of a home shopping channel show.  As usual the skit was hilarious!  Three “make believe” products were “featured” on the show.

The first product up was the “SolidGrill 3000” with its designer Neil Cooke.  While demonstrating that a computer can indeed double as a grill, Neil was able to show off a few new features coming in SolidWorks 2014. 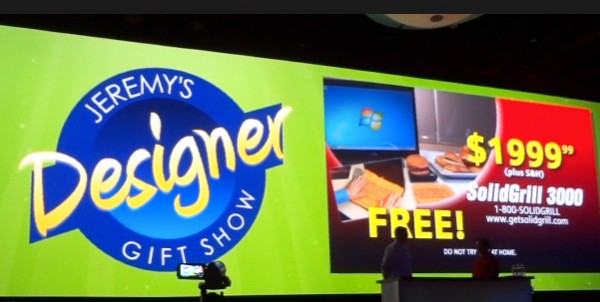 Existing View Icons – When you access the View Pallette in Drawings, SolidWorks will display an indicator (icon) as to whether or not the view is already placed in the drawing.

Display Style Context Menu – Context menus for Drawing Views now contain a dropdown menu that will allow you to change the Display Style of that particular view.  (For example, from Hidden Lines Removed to Shaded with Edges)

High Quality Shaded Views – With this setting, a shaded view in the drawing will not show and “bleed through edges” on thin surfaces

Angular Running Dimensions – Ordinate Style dimensions that can be utilized around circular parts.  You can add dimensions at any time.  (Similar functionality to Ordinate Dimensions.) 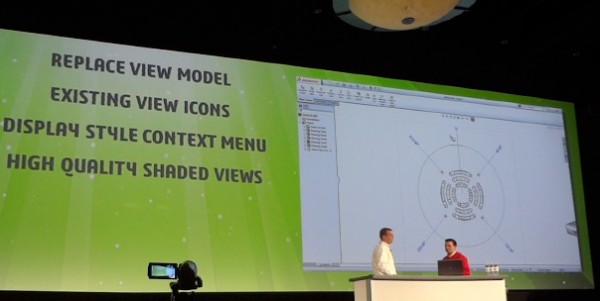 Split Table by Row Count – In SolidWorks 2014 you will be able to split a Bill of Materials in a Drawing by row count.  When you add components to an assembly, the setting is retained and the BOM will continue to split based on the number of rows you set. 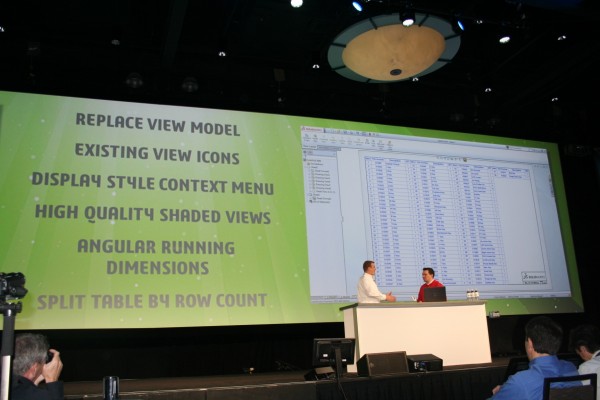 Order Independent Transparency – This appears to be a new method of applying transparency to models so that overlapping faces in the transparency blend properly.  The result is a much better (and more accurate looking) rendering of the transparency.  This wasn’t talked about specifically, so I had to do a little web research to make sense of it.  J

Sunlight and Sunlight Animations – Sunlight is a new lighting option in the Appearances tab.  It allows you to enter your location, date, and time of day to get the accurate sunlight settings.  (Wow…I was surprised it goes to that much detail!)  You can also you PhotoView 360 to animate the changes in sunlight position. 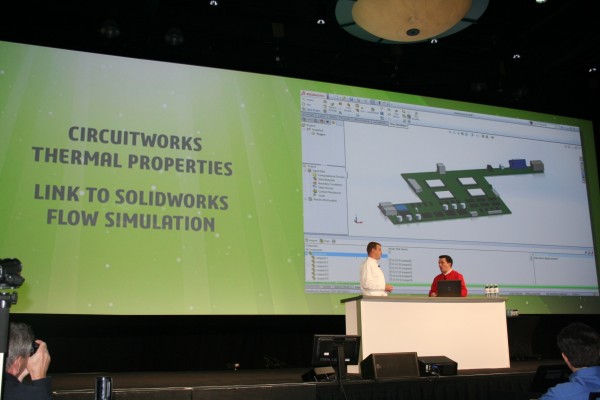 The next product up was Justin Burton’s “SolidWorkOut”.  This was a bicycle with a laptop mounted on the front and the rear wheels suspended so that the pedal motion can supply power (to a workstation!) 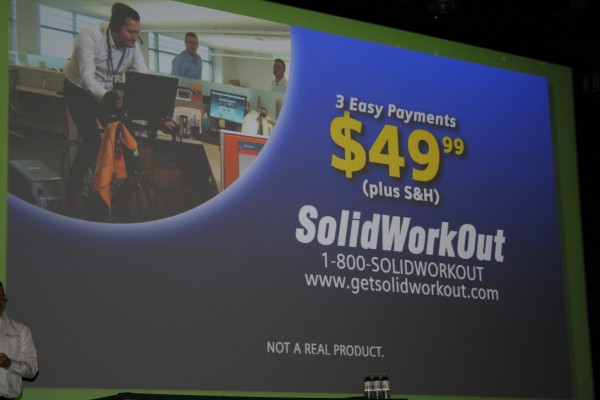 Slots in Hole Wizard – Slots have been added to the Hole Wizard in SolidWorks 2014!  (I think this was on one of the previous top ten lists.)  You can create regular slots as well and counterbore and countersink slots.  You also have options for position and orientation of the slot.  One really neat thing about this is that if you have hardware already mated in place, the mates will not be broken if you switch from a hole to a slot.  (Very slick!) 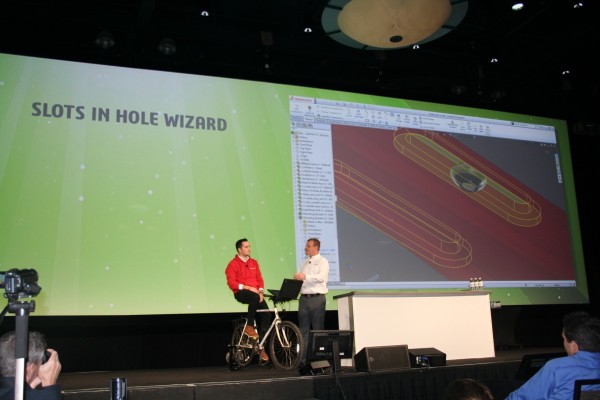 Path Length Dimension – The new driving dimension option in sketches allows you to designate a path length dimension for a closed loop combination of entities.  The example given was a sketch of the path of a chain on a bicycle.  It also has the ability to add components tied to this path length dimension by increments, such as links on a chain.  (I’m not quite sure how they are doing this…but it looked pretty cool!)

Fixed Length Spline – Splines now have a fixed length setting that will force the spline to maintain a specified length as you drag the points of the spline around changing the shape.

Style Spline – This is a new type of spline that yields a “higher quality” spline with more control.  The control vertices look different than the existing spline tools.  You can add relations and dimensions to the control vertices as well.  The curvature comb of the Style Spline has less “bumps” and inconsistencies versus the older spline option.  This is one of the tools that I can’t wait to try!  Side note while we are talking about splines.  Rich Allen mentioned in the press conference after the General Session that there are also enhancements to the Surfacing tools coming in SolidWorks 2014. 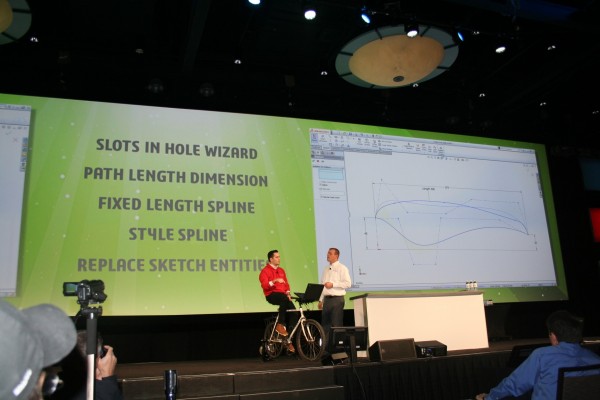 Replace Sketch Entities – This one really looks like a big enhancement.  You can replace existing sketch entities with newly generated entities and all of the references will be updated.  (This is another one I really want to test.  It will be impressive if they can deliver a consistent solution that updates all the references to the entity being removed.)

Reuse Existing Harness – You can take an exiting SolidWorks Electrical Harness and “reuse” it to create an new harness that routes to different points.

Clips in Flattened Representation – You can now include clips in Flattened harness views.  (This looked like what exists in Routing today…so I’ll probably have to get some clarification on this.  I’ll update the post if more information is given to me.)

Colored Connector Pins – Connector views will automatically populate the pin locations with a solid hatch that matches the color of the wire.  This will make it easier for workers on the shop floor to identify which color wire goes in each contact position on the connector. 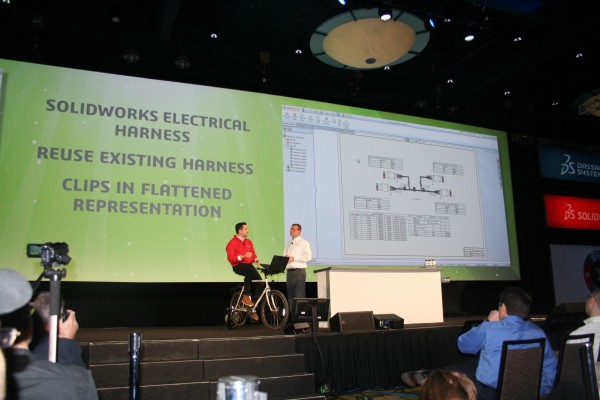 Bolt Mapping – SolidWorks Simulation can detect fasteners within a model and automatically create matching connectors in the Simulation Study!  (This looks like a really neat trick.  I’m curious to see if this still works for companies who DO NOT use Toolbox fasteners.)

Results Symmetry – If you setup only half of a model to run a simulation, you can now use symmetry to view the results of the full model.  (This assumes your model has true symmetry.)

Mark Schneider was up next to show the “DesignBelt Premium”.  This was a tool belt with a laptop attachment.  Watching him hammer boards together on top of the laptop was pretty funny (especially when the laptop blue screened).  Here’s what was shown in this part of the skit. 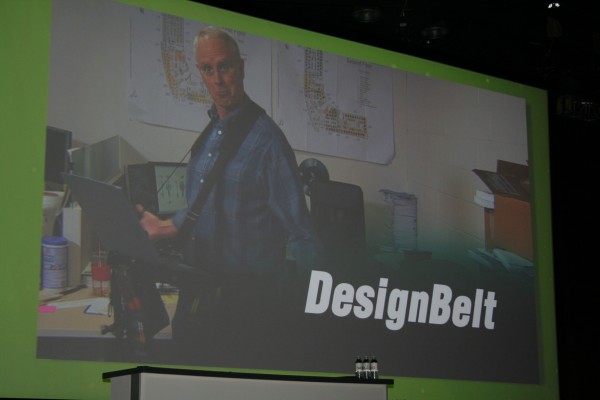 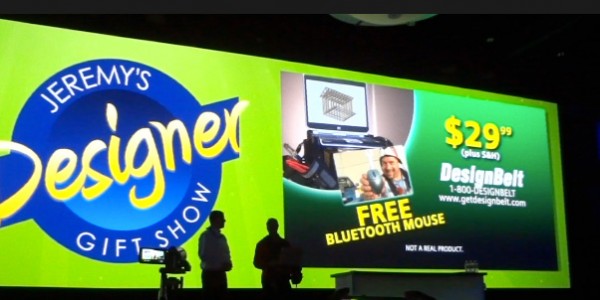 Environment Themes – Ok…I have to describe how this one was introduced.  The first image was a screen that had virtually EVERY toolbar on the screen active, which of course doesn’t leave you much of a graphics area for your model.  (I’ve actually seen people who setup SolidWorks like this over the years…not so much these days though.)  Here’s a picture below: 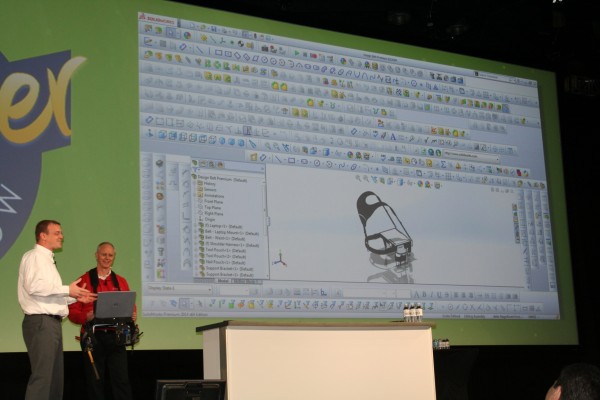 Ok, now let’s talk about Environment Themes.  You can setup “themes” which load only certain toolbars or tabs on the CommandManager.  You can even add specific buttons to toolbars, hotkeys, or mouse gestures that are only present in that particular theme.  This looks like a nice customization option.

History Folder – The History Folder is located at the top of the FeatureManager and always displays the last five features you’ve accessed.

Flexible Assemblies Context Menu – The title here pretty much describes the new feature.  You can now make a subassembly flexible by using new tools that pop up in the context menu.

Streamlined Save As Copy – In SolidWorks 2014 you can do a Save As on an assembly and choose Save As Copy much like previous version.  But there is a new option that leaves the new copy open.  Within this interface, you can create copies of components all in one shot.  (The UI looks very similar to what you get when you choose use Pack and Go.)  When you use this tool, any upper level assemblies that were open when you performed the Save As Copy command will still reference the original model (not the copied one).

eDrawings with Augmented Reality – This was previewed last year at the SolidWorks 2013 press event.  This tool allows you to superimpose your SolidWorks model into the eDrawings for iPad (or Android soon) by using the device’s camera.  A QR code printed on paper is used to “locate” the model. 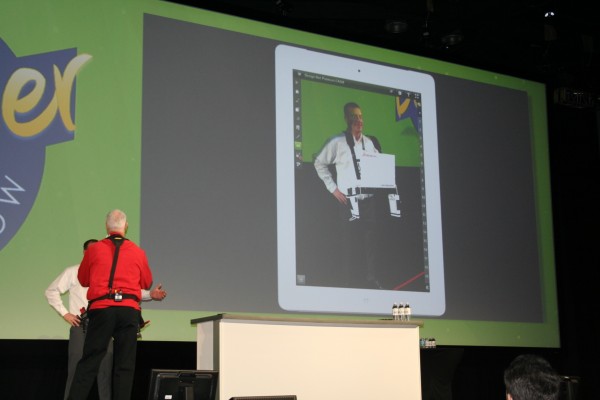 Sheet Metal Corner Gussets – You can now add corner gussets to sheet metal parts.  Options for this tool include impending depth, controlling each length, width, and draft.  Gussets are automatically ignored when a sheet metal part is unfolded. 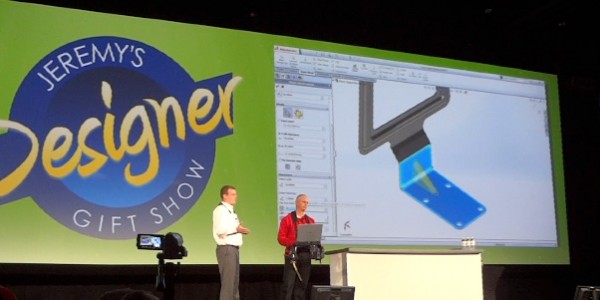 Lofted Bend Transitions – You now have more control lofted bends in sheet metal.  You can specify the number of bends in the loft through new options in the PropertyManager.  The flat pattern of the part gives all of the break lines for the lofted bend.

Smart Mate Delay – Smart Mates no longer immediately snap to any geometry you slide the cursor over.  There is now a customizable pause period that waits for the mouse cursor to stop before attempting to apply the Smart Mate.  You can set this period to whatever interval you desire.

Rotate Exploded Views – You now have an option to rotate components in Exploded view.  This can be used to rotate screws as you remove them from their secured position or move components angularly to its exploded position. 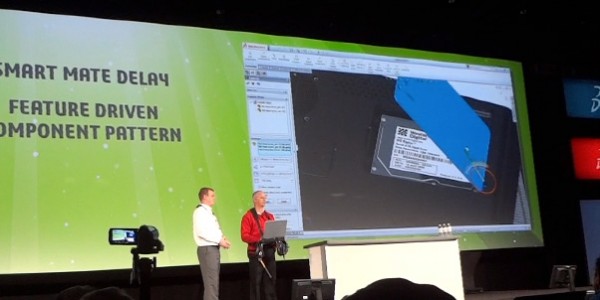 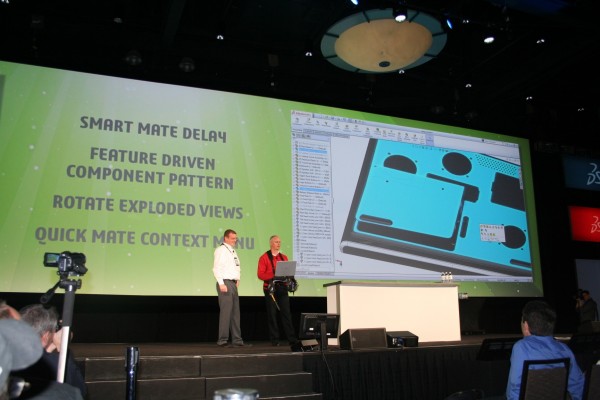 This was a pretty good list of features and as always, this isn’t ALL of the enhancements coming in SolidWorks 2014.  Look for SolidWorks 2014 Beta towards the middle of this year.

Thats all for now.  Stay tuned…more to come!

The S Key Experiment continues for me and in this post we dive into Part 3 which covers using the S Key shortcut menu in ...

The company I work for has recently implemented Microsoft SharePoint 2007 for our internal intranet.  I am pretty new to the software but have found ...

I was doing some surfing this weekend and thought I would checkout some of the details of Microsoft’s next Operating System, Windows Vista.  I started ...