After talking about it for quite some time here on the site, today marks the first installment on a series of posts on SolidWorks Electrical Routing.  In this first example I guide you halfway through the creation of an Electrical Harness using what I call the “on the fly” method.  This particular method is often used when you don’t have any electrical wiring information to import in the form of a “From/To” list.  In this example we have an electrical enclosure that contains several connectors along with some terminal block connections.  We know in general where the signals are routing from and to, but don’t yet have any detail on the number of signals or any pin to pin connections.  This is a quick way to get some accurate wire lengths.

I originally wanted to continue on and show how to manually insert electrical wires in this harness, but the length of the video would be almost doubled.  We will save that for Part 2!  In later posts I’ll go into some of the important details of the Routing package which include more information on the sub-assembly structure, Connection Points, Route Points, and special in-context capabilites that are only present in the routing package.  To watch Part 1 simple click on the image below to load the video. 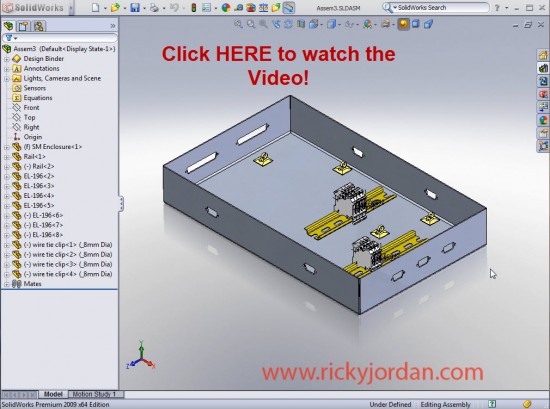 The videos on this site should be much improved now in the way the flash video loads thanks to a recent upgrade to Camtasia Studio 6.  Let me know if you have any problems viewing it.  I still have a few new things in store for the videos in the future as I get time to explore some new tools at my disposal.

Although in general, the User Interface is the same when comparing SolidWorks 2010 to SolidWorks 2011, there are some subtle differences.  Lets start with one ...

I don’t post links to press releases here too often, but this one really caught my eye today.  Growing up in the 80’s, I was ...