Spring is just around the corner (or already here for some) and usually that means it’s Beta Testing Time for many SolidWorks users.  A few days ago I contacted SolidWorks to see if I could get some details on the SolidWorks 2010 Beta Contest and they were gracious enough to provide some information that I can share with you.  The Beta program will be happening a little later this year as compared to past years.

As with previous Beta programs, SolidWorks is looking for customers that span many industry sectors which include:

Remember that you DO NOT need to be an “expert” user to participate!  Feedback is always welcome from ALL users.  If you want to read about some of the enhancements to SolidWorks 2010 that have already been made public, click HERE.

The priorities of the SolidWorks 2010 Beta Program are:

No details of the contest prizes or point system have been released yet.  As soon as that information is made available, I’ll post it.

I can’t confirm for certain, but I believe the SolidWorks 2010 Beta Program will be managed through the Customer Portal just as it was last year.  To be eligible for the Beta program last year, you had to be on an active subscription contract.  I have not heard whether or not that will be a requirement for this year’s program, but I suspect it will.  To sign up for the Beta Program log into your Customer Portal Account and look for the “My Profile” icon as shown below. 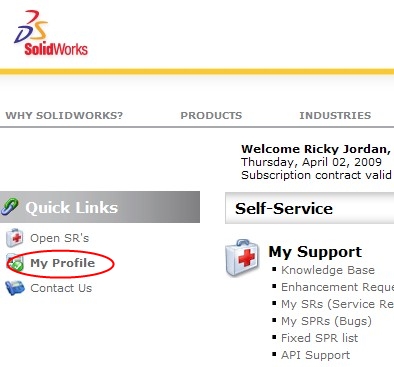 On your Profile Page set the option for “Notify me for Beta Programs”.

I’m sure more details will be released as we inch closer to the first Beta period.  As with past programs, a special forum will be available for users to discuss the new features while still under the NDA (Non Disclosure Agreement).

SolidWorks World 2007 is coming up fast!  As we get closer to February 3rd, you’ll hear more and more about it.  SolidWorks has begun a ...

Next Up: SolidWorks World 2012

That time of the year is almost upon us.  I’ll be flying out to SolidWorks World on Sunday and should arrive mid-day in San Diego. ...

Arrival at SolidWorks World is always one of the coolest parts of the trip.  Getting to see friends who I haven’t seen since last year ...

Well, due to an early morning start on Saturday with not much sleep from the previous night, my Saturday report on SolidWorks World is coming ...