One of the WELCOME changes in SolidWorks 2009 is the “consolidation” of Colors and Appearances.  Colors/Optics have actually been removed from the software with Appearances left behind to manage it all.  As I pointed out a few weeks ago, in SolidWorks 2008 you needed to be mindful of how you apply Colors and Appearances.  Appearances were ONLY tied to RealView and PhotoWorks.  Obviously in SolidWorks 2009 this is no longer the case.  Appearances also now manage Textures too.  Both the Texture and Color icons have been completely removed from the software to eliminate confusion.  In an effort to communicate the new functions of Appearances better, SolidWorks has added some color to the Appearances Icon.  (It is shown above.)   The unified Color System to me is MUCH easier to manage.  You no longer have to be conscious of whether RealView is on or off when you assign colors to your model.

Another new enhancement to Appearances is the Pop up Toolbar that appears when you drag an Appearance on top of a part face or component in the assembly from the Task Pane.  It allows you to “on the fly” apply the Appearance to a Face, Feature, Solid Body, Entire Part, or Assembly Component.  A little trick I learned in part files is that if you are applying an Appearance to the entire part, you can just double-click the Appearance selection in the Task Pane.  (Very nice shortcut – No dragging necessary!)  The result of these two behaviors allow you to quickly apply Appearances to your model without ever having to open the Appearances PropertyManager unless you want to tweak the colors to something that isn’t default in an Appearance.

You can now make Appearance Modifications via the Display Pane.  All you have to do is left-click in the Appearance column of the Display Pane next to a component or part feature (depending on whether or not you are in a part or assembly) and select “Appearance” from the pop-up menu.  Speaking of the Display Pane, they are much more “tidy” in 2009 since the Texture & Color/Optics columns have been removed.

UPDATE – 8/5/08: I have updated the section below since I missed how to adjust the Texture scaling in the first version of this post.  Thanks to Justin for pointing this out.

One thing you might not notice with Appearances with Textures is that the Scaling is controlled by sizing the rectangle shown in the graphics area.  Users might be looking for a slider bar which is how Textures (outside of Appearances) were done in previous versions of SolidWorks.  Depending on the Mapping Style selected, you also have the abilty to rotate and control the axis direction of the texture.  There are three Mapping size preset options for quick selection.  If you want to fine tuned the scaling more, that is when you would use the rectangle in the graphics area.    If you enable PhotoWorks, numerical entry is available for mapping size.

Below is a link to a video demonstrating some of the new functions of Appearances.  Enjoy! 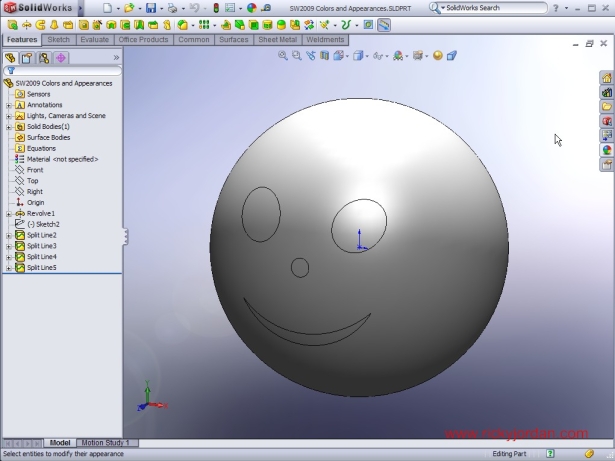 Tonight I had the privilege of attending the Knoxville SolidWorks User Group meeting which featured SolidWorks founder Jon Hirschtick.  I’ve been hearing LOTS of great ...

OK…almost a week now and no posts?  I have a good excuse.  🙂 Back in June Matt Lombard asked me to be the Technical Editor ...