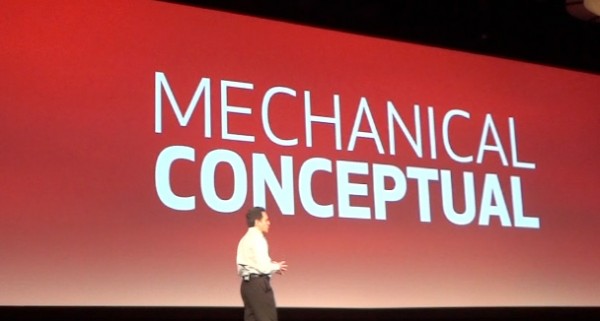 The BIG news of the day on Monday at SolidWorks World 2013 was the announcement of SolidWorks Mechanical Conceptual.  Over the last three years speculation has run rampant since the now infamous “Cloud” announcement was made at SolidWorks World 2010.  To begin with, I’m going to give you an overview on what was presented.  I’ll then follow up at the end with a few comments.  Fielder Hiss made the presentation for Mechanical Conceptual on stage.

This is the first product developed on top of the 3DEXPERIENCE platform.  (Absolutely no mention of V6.  As best I could tell, this is the name of the new platform.)  The tool is complementary to all the products that SolidWorks users use today.

It is a tool for mechanical designers to do their concept design work.  Its specialty is with mechanisms (moving parts).  Its purpose is to help get ideas or concepts into 3D right away while fostering an iterative design process and maintaining multiple configurations.  According to SolidWorks, 31% of project time is spent working with concepts.  On average, there are 6 conceptual iterations in an individual design.  There are often both internal and external groups that are part of the conceptual process.  Ease of use in collaboration is important in making this process smooth, so that all groups can give input into the design.  This is where the Social aspect comes in, which we will talk about in a few moments.  The detail design process within SolidWorks can often limit creativity in the conceptual process.  This tool is designed to capture concepts digitally, provide capability to manage multiple iterations, and most importantly be easy to use and easy to change. 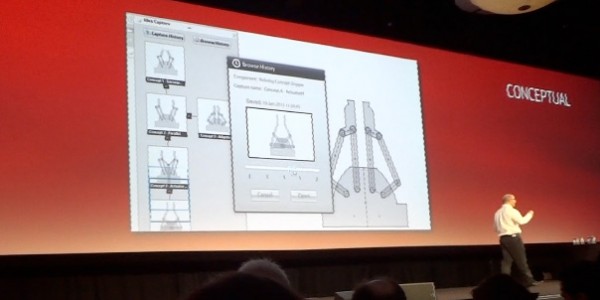 Social integration is designed into the “foundation” of SolidWorks Mechanical Conceptual.  Designs can be shared with both internal and external groups who are “stakeholders” in the project through “private communities”.  The example page shown appeared to be a derivative of a 3DSWYM page that allowed users to post comments on the design.  No other details were given. 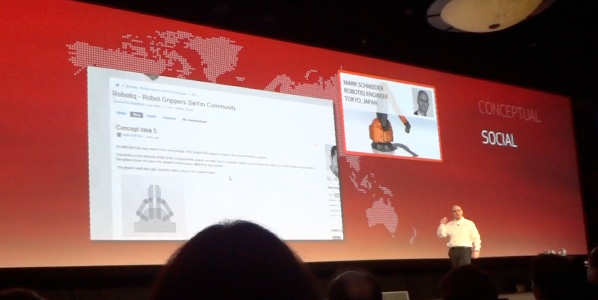 SolidWorks Mechanical Conceptual is always saving designs and capturing iterations as you work.  Not only does this allow you to easily go back and use a previous design, it also remembers how components were used.  Speaking of components, there is a BIG difference in this area.  SolidWorks Mechanical Conceptual introduces a single modeling environment (which of course is quite different from SolidWorks).  This allows the user to NOT have to worry about the file structure, Bill of Materials, or subassembly order while developing the concept.  It was said to be a “more natural” way to do concept design.

Here a couple of key statements made about this software:

The software was said to be “instinctive” and is constantly learning.  Since everything is stored in a database, the software understands how you use components and becomes smarter with every use.

Motion Simulation is fully integrated into SolidWorks Mechanical Conceptual.  It uses this simulation to validate the function and to show life-like behavior in the design.  The example shows both motion paths and envelopes.

It also has integrated Structural Simulation.  This will allow the user to verify that the stress is within limits – all while still in the concept stage.

SolidWorks Mechanical Conceptual is always connected online.  It prevents the loss of data due to deletion, application crashes, or accidental over-writes.  It provides a connected interface (without the burden of a PDM interface) to other team members so that screen shots can be shared within the interface and designs can be updated real-time for teams working in separate locations.

As a “complementary” tool to SolidWorks, the models developed in SolidWorks Mechanical Conceptual can be brought into SolidWorks when the detail design process is ready to begin. 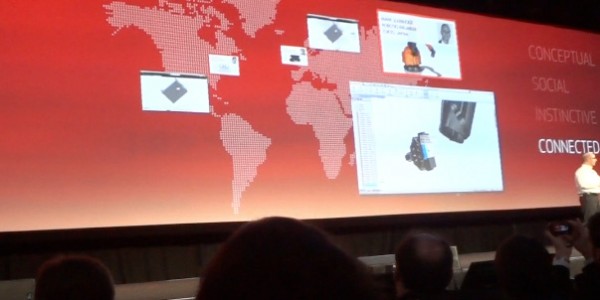 The information can be accessed anywhere at any time.  Mobile access tools can also be used to access this data.  The example on the screen shows a model being brought up with on an iPad via a 3DEXPERIENCE app. 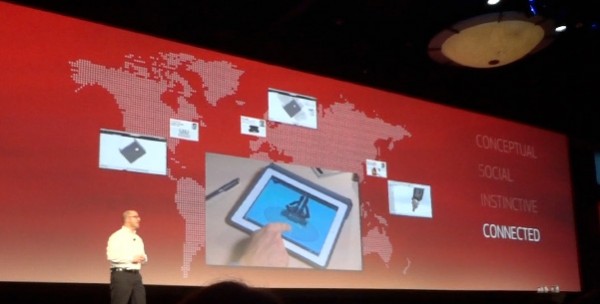 First and foremost.  The only thing I know about this software is what was shown today.  So the statements I’m going to make below are purely my opinion at this point.  To be blunt…I could be totally wrong on some of this…so bear with me.

As far as the modeling/sketching capability goes, the software looked very MUCH like SolidWorks in many ways and also very DIFFERENT than SolidWorks in many ways.  What appeared to be sketch relations shown on the screen looked very much like what we have today in SolidWorks.  Even the way they are applied (with a context menu) looks similar.  The way some of the sketch entities were created looked very different.  Some of the “elements” of the sketch appeared to be REALLY easy to create while automatically receiving a shading of sorts which looked to differentiate it as a separate element from other entities.  This fell right into quickly creating a 2D layout with full motion capabilities.

The direct modeling tools looked really easy to use.  Extrusions and cuts were made with simple push/pull actions.  This probably won’t be much of a surprise to many as many of the modelers out there that rely heavily on direct editing already do this.  You could see a list of features briefly, but no details were given on the specifics of how they worked.

The social aspect of the software looked very easy to use.  You could see many design cues taken from popular social apps out there today and since it is built into the software, generating these messages to other design team members looked easy.

There was a History Browser shown that appeared to let the user roll back to previous designs.  Again…looked pretty straight forward to use.

I was REALLY surprised to see both Motion Simulation and Structural Simulation built into this tool.  This is much more than I would expect to see in the first release of a concept modeler.  I’m very glad to see it there though.  Time will tell as far as it’s usability and capability.

The connected portion DID appear to rely heavily to an online connection.  There was absolutely no mention of the “C” word, but what I saw lead me to believe that online hosting was going to at least be one of the options offered with this package.  Nothing was said to indicate that a “database” couldn’t be installed locally as well, so we are just going to have to wait on see on this.  I don’t think we can speculate one way or the other as to whether this a “cloud” only offering at this point.  (There was more discussion at the press conference…which I was unable to attend.  I have the audio from that but having listened to it yet.)

Export to SolidWorks Mechanical Conceptual models to SolidWorks:  The immediate question that popped into my mind was “Do the parts have features?”.  That was of course not shown, so we will have to find out those details later.

All in all, SolidWorks Mechanical Conceptual looks like a very interesting package, but I can’t say how good/bad it is until I get some seat time with it.

Limited Beta testing with select companies will begin in May and an October/November full release date is the target.  No pricing details were given.

For those of you who are interested in test driving SOLIDWORKS 2017 Beta but had limited options to a hardware system or just simply didn’t ...

No…I’m not talking about Saturday Night Live.  They have had some pretty darned funny skits on the Presidential candidates lately though….but I digress.  I’m talking ...

I’m sure if you have read any of the SolidWorks Blogs in the past couple of weeks, you have probably heard of the new Custom ...