I’ve found that through the years of using SolidWorks across various industries, different toolsets are sometime utilized more with one type of product vs. another.  In recent years as I have moved into working with Aerospace & Space products, Center of Gravity (Center of Mass) and Moments of Inertia are properties that I have to pay much closer attention to.  In the past when working with industrial equipment design, test equipment, or consumer products, I have not had to use these tools as often. 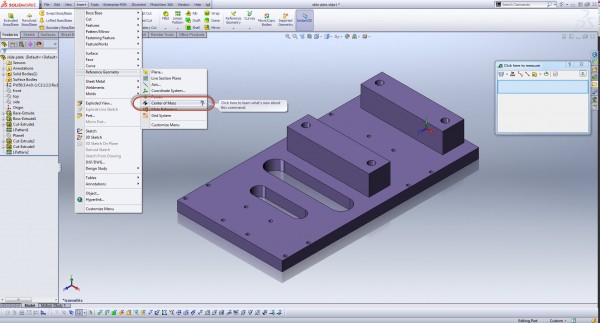 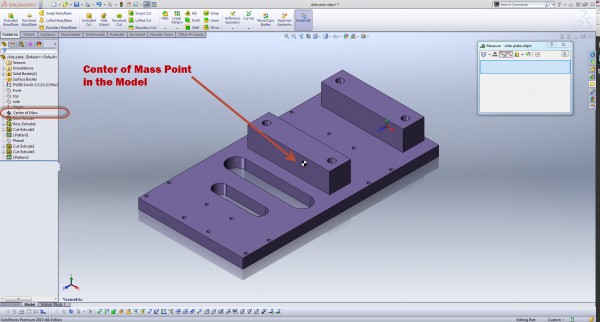 As you can see, the Center of Mass (COM) is displayed on the screen.  You can make measurements to the COM at any point. 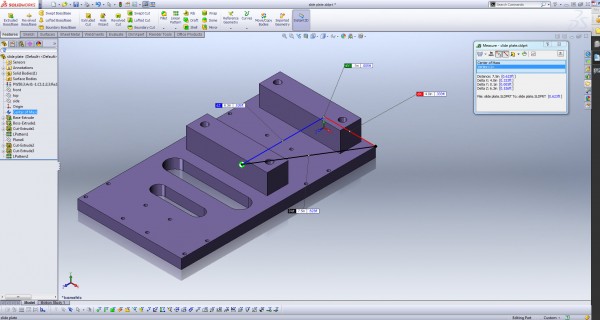 There is ANOTHER tool associated with the COM feature.  Since the Center of Mass is placed at the top of the FeatureManager, it is always calculating the proper CG as it should.  If you want to however display a reference point where the CG WAS located at some particular point in the FeatureManager, you can insert a Center of Mass Reference Point.  In the example shown below, I have placed a few points to show the progression of the CG as features are added.  (Note the position of the rollback bar as the point is added.) 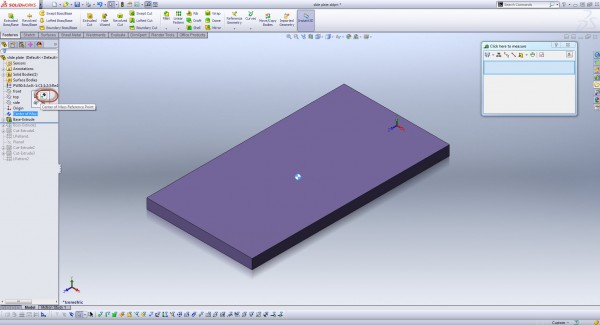 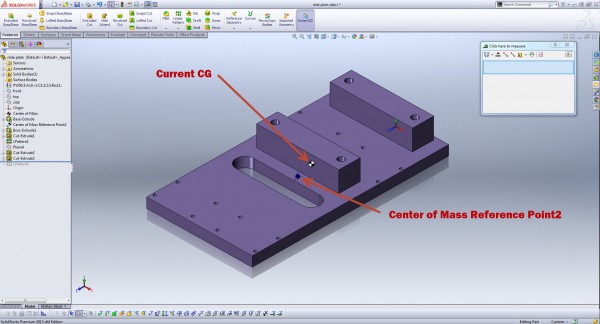 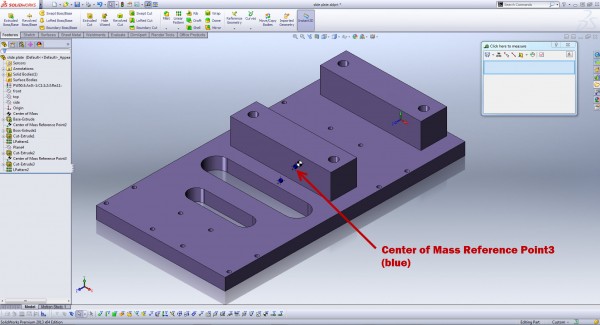 As you can see, by adding these COM reference points, you can track the progress of the CG as you add features to the model.  Note that these are fully functional reference points that CAN BE DIMENSIONED to.  If a final feature must be added to a model and located off the CG at that particular point in time, you can dimension the feature to it! 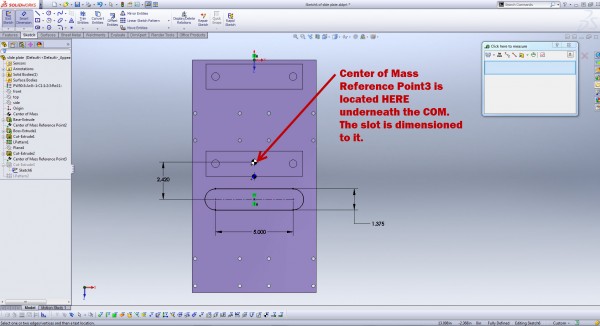 Now lets go up to the next assembly.  If you insert a COM for that assembly, the CG for the part (yellow) and the assembly (black/white) display different.  As shown in the image below, you can turn the display of COM symbols on/off globally. 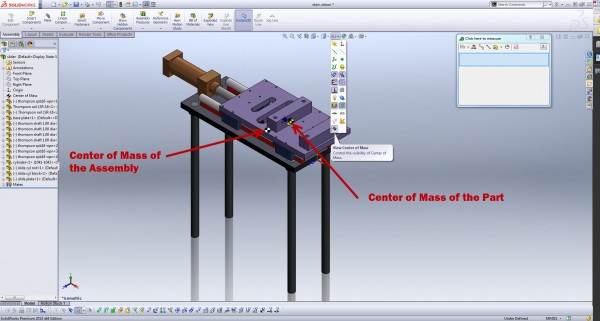 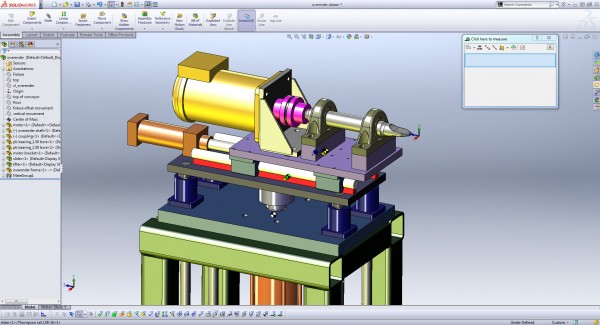 If we move the slider assembly over to the far left, you’ll see that the CG of the Subassembly (green) and the CG of the Top Level Assembly (black/white) update accordingly.  (The motion of the slider is defined at the slider subassembly.)  (BTW – All of the files shown in this article are available in the “whatsnew” Samples folder.) 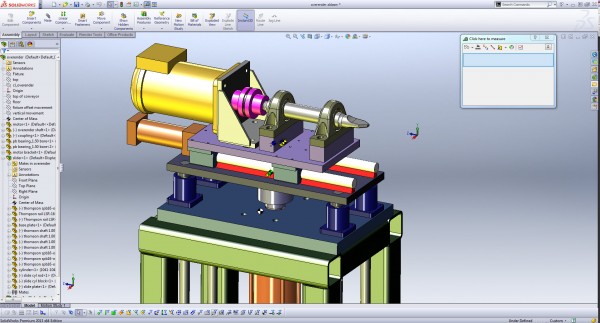 You can also show the COM feature in a drawing and can dimension to it! 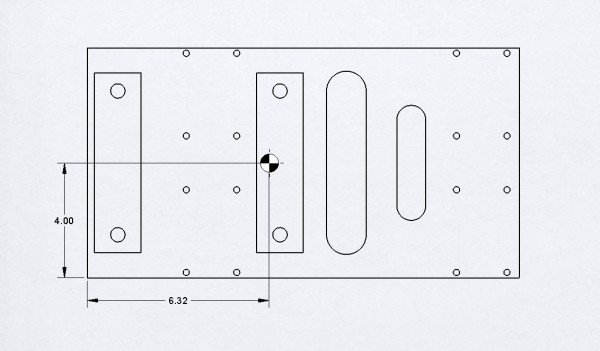 In previous releases, SolidWorks would allow you to manually designate the CG of any part or assembly which “overrides” the geometry calculated CG.  (As part of this process, you could also override the mass.)  Unfortunately when you do this, and top level assembly that that part or assembly is placed in will NO LONGER be able to calculate the Moments of Inertia.  (I’ve talked to many users who found this out the hard way, yours included.)  Below is an example of what you would see when you run mass properties for an assembly containing a part with “Assigned mass properties” in SolidWorks 2012.  Note that NO Moments of Inertia are given. 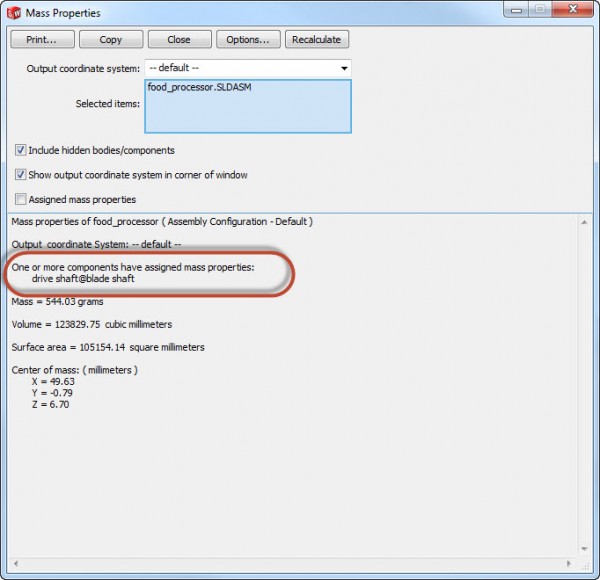 In SolidWorks 2013, this limitation has been removed.  You can manually input the CG location, mass, and now the Moments of Inertia of any part or assembly.  When you do this, it no longer withdraws the Moments of Inertia calculation at assemblies upstream from the over-ridden component!  In the example below,  you’ll see how easy it is to over-ride the Mass Properties of this “motor” component.  (This is often a need for purchased components such as this.) 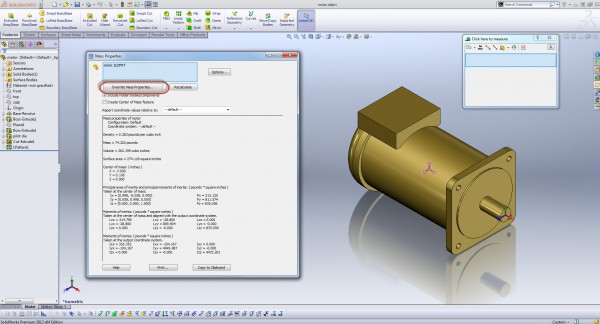 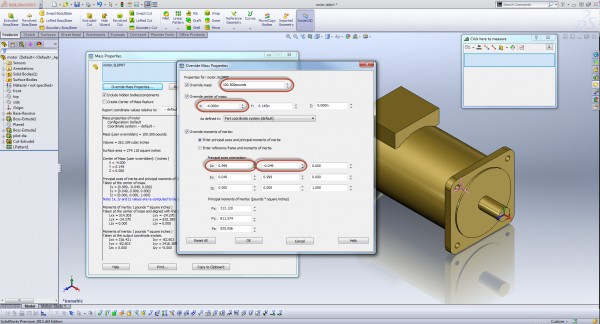 Below you’ll see the re-calculated Mass Properties (which includes the Moments of Inertia).  Note that the window indicates which properties are over-ridden.  (I highlighted them in yellow to make it easier to find.) 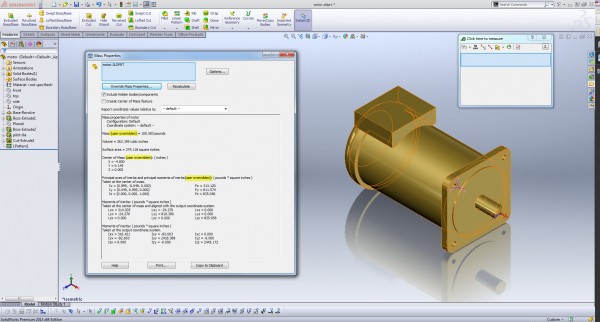 When you go to the top level assembly, we still get all of the Mass Properties and the components with over-ridden values are shown at the bottom of the report. 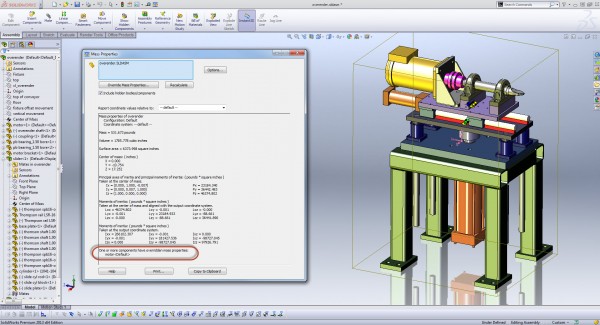 All of these enhancements to Mass Properties in SolidWorks 2013 can be HUGE time savers to those who design with these attributes in mind.  For those industries who rely on this type of data, an early transition to SolidWorks 2013 might just be in order.

Well, it looks like SolidWorks slipped a little “enhancement” in on us.  While I’m not completely sure when this new feature was added, all indications ...