Forecasting the Clouds for SolidWorks V6 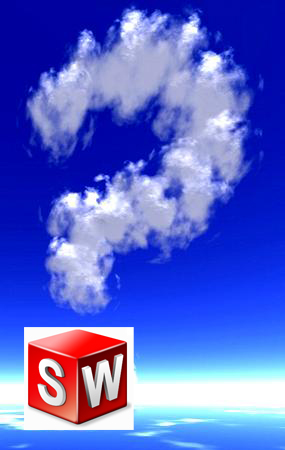 Ok…with all the Cloud jokes rolling around I couldn’t help but have a little fun with the headline.  SolidWorks V6 or “The Cloud version” as dubbed by many has been somewhat quietly talked about off and on for about the last six months which followed up a firestorm of discussion just after SolidWorks World 2010.  The past few weeks the discussion has picked up quite a bit in advance of SolidWorks World 2011 so I figured I would weigh in on a few things.

I don’t recall seeing anything quite like this in the CAD industry during the time I’ve been following it.  A technology demo is shown in Anaheim which has led to and incredible amount of discussion and speculation for the past year.  It’s kinda at its “fun” point right now for those of us CAD geeks for one main reason.  There is NO PRODUCT available at this time.  While some of the “fun” certainly has serious overtones (after all there is a HUGE amount of SolidWorks data existing in industry today) it is for the most part in the “harmless” discussion phase for users.  I haven’t heard of SolidWorks customers fleeing in droves (boy don’t you know that their competitors wish they were) so I think its safe to say that everyone is in a “wait and see” mode.  As soon as the first “next generation” product becomes available though, ALL OF THAT WILL CHANGE.

Having such a HUGE userbase, SolidWorks has a tremendous responsibility to their customers not to mess this up.  (And they did say this several times at SWW2010)  They are going to have to make the transition as painless as possible for their customers in order to be successful.  So there is without a doubt quite a bit of pretty serious work going on behind closed doors in Concord (and in France).  Meanwhile we are all standing outside the doors waiting to get our first look.  While no company is perfect it has been MY experience through the years that OVERALL SolidWorks has provided good support for ME as a customer.  (Sure I could nitpick in some areas..but I’m trying to keep this big picture folks)  Some of you out there may have a different opinion on that.  I’m not looking to start a debate on that by the way.  Who really has the time and energy to do that….I’ve got two jobs and two kids people! 🙂 )  So anyway…back to point.  Based on that I am taking the stance of assuming that SolidWorks will provide the proper tools and support for users to move.  I mean with this much at stake, how can they not?  Will it be perfect…most certainly not….but it cannot be grossly imperfect..that is for sure.

Once you move to the cloud…here is a BIG question for MANY folks.  SECURITY.  How will this be addressed?  It has been stated that “private clouds” could be made available for customers requiring it.  Now I’ll admit first hand that I don’t have time to keep up with all the newest cloud technology (We’ve got our friends in the IT profession to keep track of that for us.) but my understanding of a “private cloud” would be a server with “extra” security measures in place vs. hosting on a place like Amazon EC3.  We’ve got to get more definition out there in this area for sure.  I keep wondering if there will be some sort of “certification process” to test these private clouds before some customers will permit their data to be stored on it.

So I’ve hit some of the “major” concern areas first.  But lets be realistic here.  For us to even consider changing to the new platform, the new product is going to HAVE to be compelling enough to lure us over to it.  This is the fun part of the discussion for me.  There were a few things I spotted last year that REALLY got my attention with SolidWorks V6.  (Ok…calm down folks…lets just put all those bottled up “concerns about the cloud” aside for just a few minutes.)

If they are starting with a clean sheet of paper, I think we could be looking a some pretty groundbreaking technology when it comes to being able to harness multiple cores and processors.   Being able to work comfortably with little to NO speed issues at all in a 20,000 component assembly is a pipe dream with ALL CAD software packages today.  If they can really nail this…then there’s the first compelling reason to take a serious look at it.  This is the piece I am MOST interested in.  If they can drastically cut down load and save times then there will be some chunks of time that will open up for reducing level of effort on projects.

Umm….yeah…it would be REALLY COOL to allow MORE THAN ONE person to open an assembly at a time!  That is what was mentioned last year.  Here’s another one that could be a game changer.  I mean this could drastically change the way a design team WORKS.

I think if you are reading this post then you have probably been at the least “involved” at some point in specifying a full up CAD Workstation.  Video Cards…RAM…Processor…UGH.  It can get ugly.  I wouldn’t know how to act if I could just have our IT department “pull” a standard PC/iPad/Mac/Whatever machine out of their stock for our next CAD workstation.  (I’m not saying that an iPad would provide enough UI to act as a full time all day everyday machine – its just not there yet….BUT…IF you can add a keyboard (possible) and mouse (not possible yet) to it, it makes for an interesting  concept.)   You could certainly save some serious $$$ if you can relax the PC requirements a bit for workstations.

So when it all comes down to it.  The sky…err…clouds.. are not falling (at least not yet).  But with a change this big coming you have to concede that failure is possible.  Hopefully for the 1.2 million plus SolidWorks customers out there, it won’t.    Having known some of the folks at SolidWorks for many years now, I can guarantee they don’t want to see it happen either.  As I mentioned earlier, I’m going to assume that there will be realistic transition paths for a large majority of users….until I am proven otherwise.  The reality of it is we are all going to have to continue speculating and giving our opinions until the day comes for that door to open and we see an actual product.  That will be a BIG day for sure.

Well…that’s all for now.  I kind of rambled a bit here and there…but hey…these are my thoughts…I thought it would be a decent change of pace compared to what you normally read here.  🙂

I just spent all day Thursday at the SolidWorks 2013 Press Event in Waltham, MA. The event was held at the newly opened Dassault Systemes ...

Fun with The Simpsons

Thomas Parel and Rob Rodriguez made there own Simpsons Avatars so I thought I would join in the fun!  The only thing they were missing ...

For those of you who are interested in test driving SOLIDWORKS 2017 Beta but had limited options to a hardware system or just simply didn’t ...