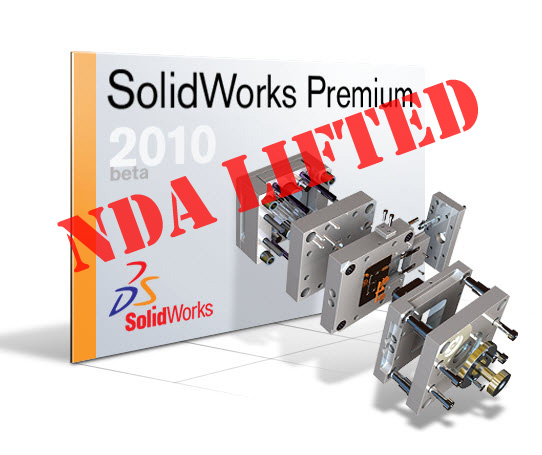 Well folks, it’s now officially August 24, 2009 and the NDA on SolidWorks 2010 has been lifted!  With this post, I’m going to just quickly highlight what I consider to be the most notable enhancements of SolidWorks 2010.  This post will be followed up with more detailed posts that will include information on the enhancements along with links to videos that show off the new features.  So without further ado, here are the highlights.

For the most part, the main structure of the User Interface is the same, but with that said, there are some improvements.  Mouse Gestures have been introduced.  A simple Right Mouse Button click and drag will bring up the Mouse Gesture Wheel.  You can program virtually any feature to any location on the wheel.  My follow up post will share more insight into the use of the feature along with details on Customization.  Below is an example of the Mouse Gesture interface inside a Sketch. 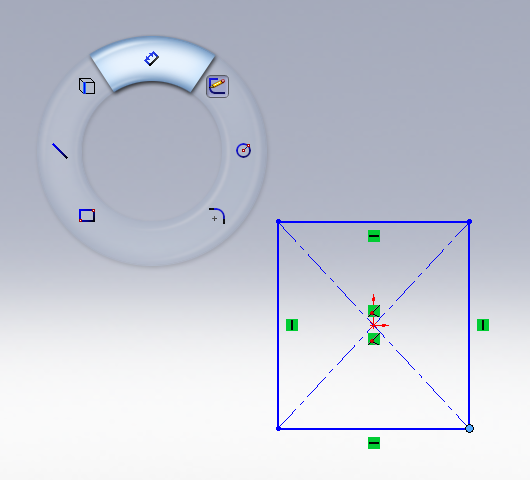 Below is an example of the Mouse Gesture Wheel while in Edit Part mode. 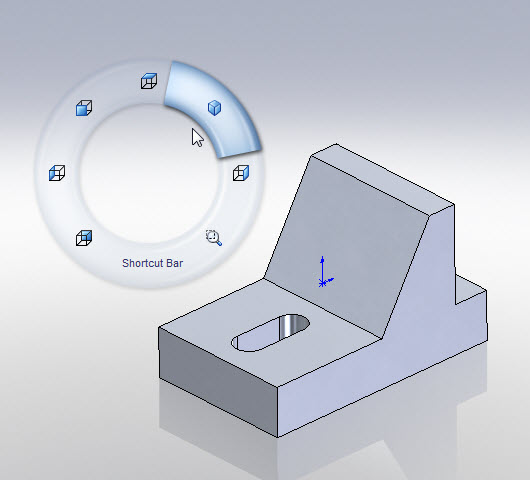 Other enhancements to the User Interface include a completely customizable Heads-Up View Toolbar.  In previous versions there was only a specific set of features available in this toolbar area but now you can put virtually any feature there as long as it is available in Tools->Customize->Commands (tab).  A Context Toolbar has been implemented into the Drawing environment.  In SolidWorks 2009, it was only available in Part & Assembly documents. There is also support now for Touch & Multi-touch interfaces.  Since I don’t have a device to test with, I can’t comment on this functionality.  I am very glad to see this though as I believe we will see more interfaces like this in the very near future.

Here is a big one folks.  Starting with SolidWorks 2010, the Help system will be available ONLINE!  Key advantages to this include always up-to-date Help information and a completely enhanced search system which sorts results by subject.  (The search results sorting is very similar to the Knowledge Base system available at the Customer Portal.)  For those that do not have online access a standard CHM type help file is included with the software.  Testing on this is still in the early stages but it has performed VERY WELL on my system thus far.  Here is a screenshot of the new online help system performing a search. 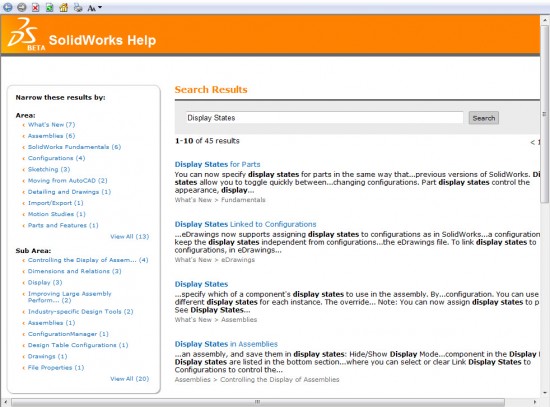 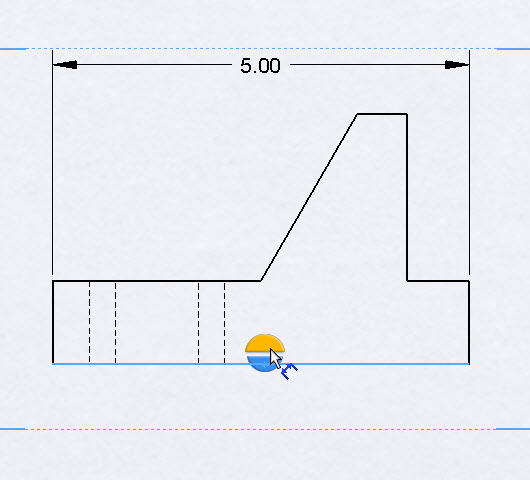 The Dimension Palette behaves similarly to the Context Toolbar in that it appears in via a “heads-up” style in the graphics area when a dimension is selected.  Inside of the Palette you can set the dimension text on the left, right, top, or bottom along with tolerance type, decimal places, and other text justification tools.  This will allow the user to concentrate more on the graphics area without having to mouse over the PropertyManager to change settings.  Below is a screenshot of the Dimension Palette in action. 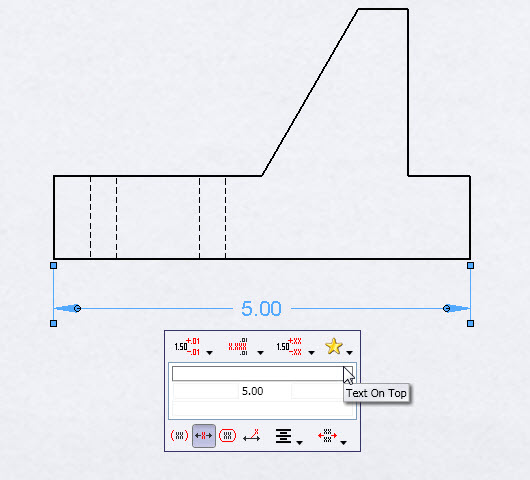 Another popular enhancement in the Drawings package is Excel-Like Behavior for all tables!  Gone are the days where you have to double-click each cell individually to enter data.  The Tab and arrow keys now work just like Microsoft Excel when entering data into ANY of the Tables in Drawings.  Below is a quick video demonstrating how quickly you can enter data in Tables. 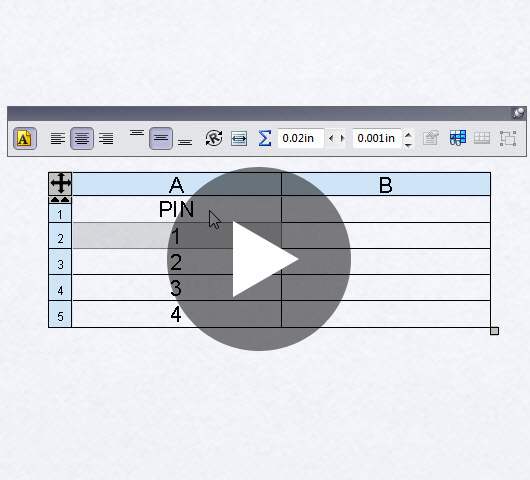 Another enhancement which I personally think will get rave reviews is the ability to Insert Individual Note Annotations into an existing Note in a Drawing.  Picture it this way – You can save the most common notes as individual line items in your Design Library.  You can then “build” your Notes by dragging and dropping the line items you need from the Design Library.  Below is a link to a short video that demonstrates this new feature. 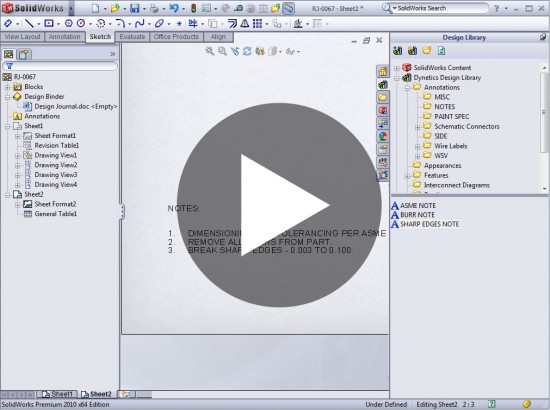 Other notable enhancements in Drawings include a Parametric Quantity Annotation option for Balloons, Custom Balloon Sizes, automated Gap adjustment when adding Center Marks to holes already dimensioned, Configuration Selection in the PropertyManager (instead of the View->Properties), & the display of Sketch Pictures (inserted in Parts or Assemblies) in the Drawing Views.

In Multi-body Parts you now have the ability to add individual Materials to each body.  The interface is located in the Solid Bodies folder in the FeatureManager DesignTree.  Below is a screenshot of a part with different Materials applied to Multiple Solid Bodies. (Click the image to see a larger version.) 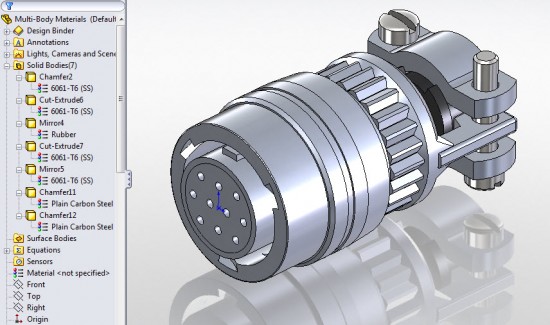 Parts now have Display States!  This allows you to store Body Visibility (Hide/Show), Body Display Mode, Appearance, & Transparency.  This capability (much like Display States in Assemblies) will allow for the use of Display States in place of Configurations on for the items previously referenced.  Below is a screenshot of the Display State interface in Parts.  (Click the image to see a larger version.) 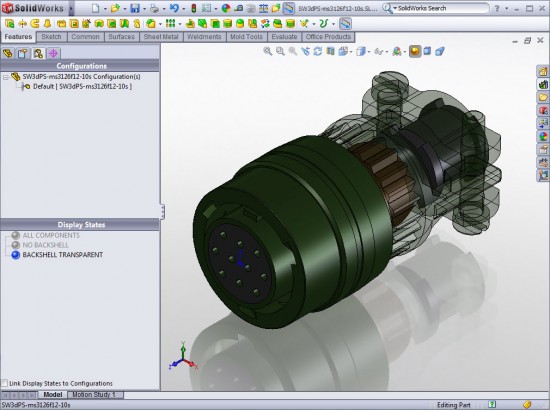 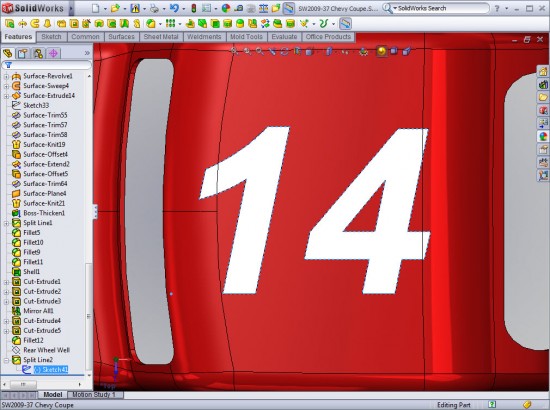 Direct Editing has been a hot topic of late and there are a few enhancements to that area of the software.  The Move Face tool has a few additions.  You can now Copy faces while moving them (I’m still trying to formulate an example where you would need this) and the Select Connected Faces command has been added to the interface to allow easier selection of face sets.  A triad tool can be moved which directly effects the way faces are moved.  The triad can also be snapped to certain entity types.  Below is an example of this.  I’ll have much more on this tool later in a more detailed post. 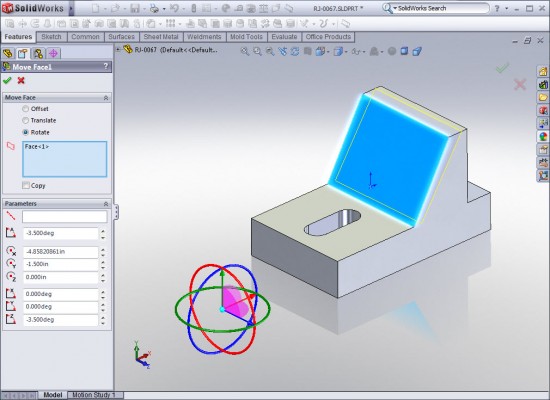 Personally, I would have liked to see more work done in the area of Direct Editing in this release.  I do like the way SolidWorks is proceeding in that the Direct Editing tools still leave a feature in the History Tree.  Also enhanced in the Direct Editing area is the Delete Face command.  The performance of this tool has been enhanced which results in smaller rebuild times.  In a future post, I will compare some examples that reveal more detail in this area.

Hole Wizard Holes no longer require the user to pre-select planar entities prior to entering the feature.  The default Hole Wizard type is now based on 2D Sketches and if no plane is preselected, the interface asks for one in the Position Tab.  3DSketch based Hole Wizards are still possible, just not the default type anymore.  The screenshot below shows the new interface. (Click the image to see a larger version.) 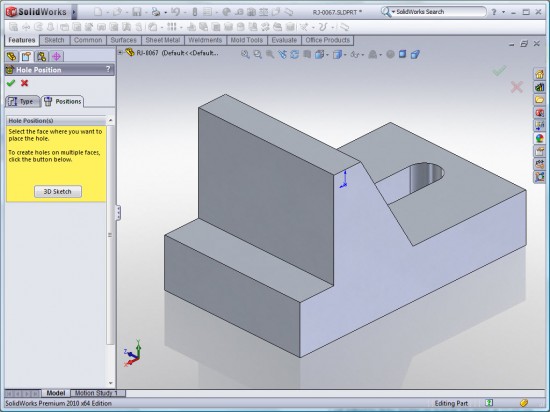 The FeatureWorks tools are now integrated directly into the menu system.  With FeatureWorks (still an add-in but now dynamically activated) you can now recognize child features of feature sets that have already been recognized.   You also have better options for combining holes during feature recognition.  There are many more enhancements to FeatureWorks, so look for a future post with more details.

The Assembly Visualization tool heads up the list of enhancements to the Assembly Environment.  This tool allows you to sort the components of an assembly dynamically in both the graphics area and the Assembly Visualization tab of the FeatureManager area based on a number of different criteria.  The default setup sorts components by Mass.  You can export the results of this tool to an Excel (.XLS), .CSV or .TXT file.  I’ll have much more on this tool later, but below is a screenshot of the tool in use. 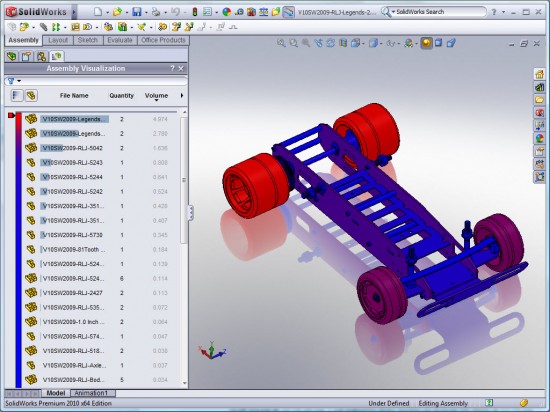 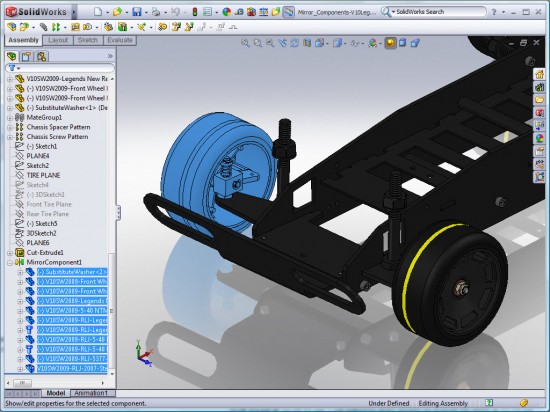 The View Mates command is now included in a separate window.  At the top section of the window all mates that have a “path to ground” are displayed.  This will help you understand which mates need to be modified in order to relocate the component. 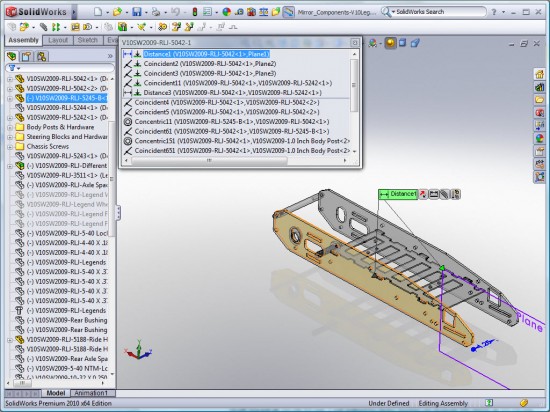 The Replace Component tool also now includes a separate window which helps the user correspond faces in “failed mates” to the new component by showing the previously mated faces of the component being replaced.  Also included is a popup toolbar which allows the user to navigate through the mates as you replace them.  Below is an example of the new toolset in the Replace Component command. 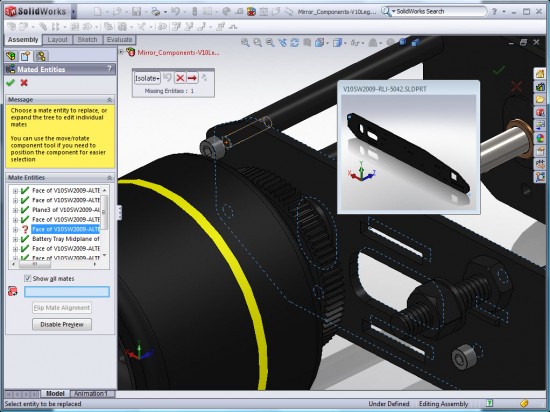 There is a very nice Instant3D enhancement in Assemblies which allows the user to more precisely move components.  The Move With Triad option is available from the Right Mouse Button menu and displays a ruler so that you can move components a specified distance “on the fly”.  Below is an example showing this new feature. 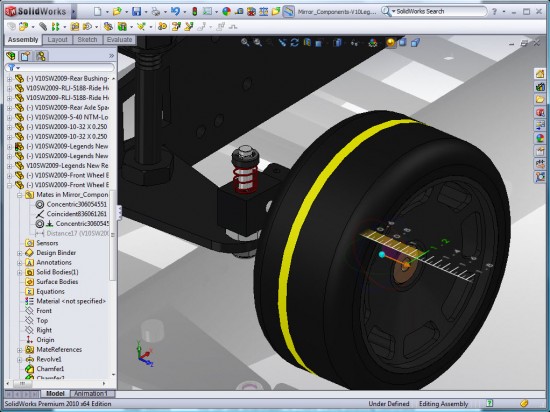 The next Assembly Enhancement I want to share is to me significant, especially to those using SolidWorks Routing.  You can now add a unique Component Reference to each instance of a component in an assembly.  This will be big in Electrical Routing because you no longer have to turn off  the “Update component names when documents are replaced” option in the System Options when using Routing.  Previously, this option was automatically turned off because Routing renamed the component with the Reference Designator name listed in the From/To list.  I’ve created a much simpler example of how this can be used by using unique Component References to describe the Front Tires of the Assembly below.  The option is set in the Component Properties window.  The Component Reference can be display in the FeatureManager as shown below. 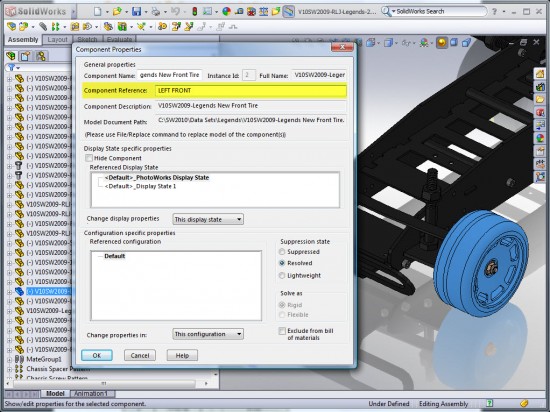 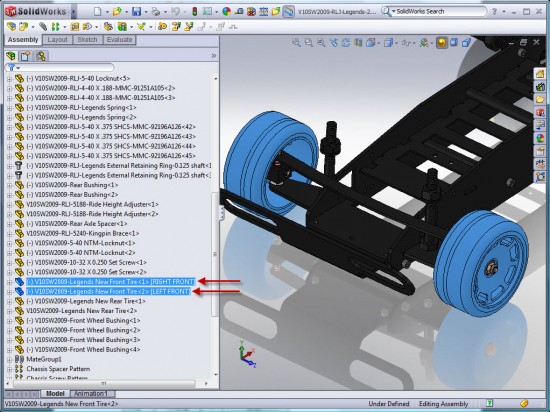 The second key enhancement is the Modify Configuration interface.  Several Options have been added to this interface which will allow users to create configurations in a tabulated format quickly without having to use Design Tables.  In this interface you can now Save Table views, configure materials, & create-edit-delete custom properties.  (Just to name a few.)  Much more detail on this later.  Below is a screenshot showing some of the new options. 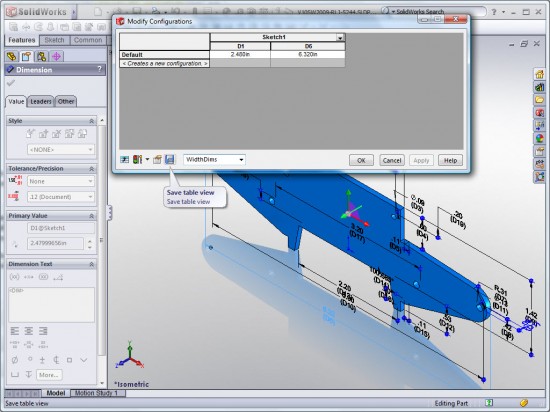 Well…those are the highlights.  The Sheet Metal enhancements are BIG and present the user with MANY new possibilities in the creation of Sheet Metal parts.  Those enhancements will be better demonstrated in a detailed post in the very near future.

Detailed posts and videos on some of the SolidWorks 2010 enhancements will follow soon.

Autodesk has sued the Open Design Alliance over the 2007 .DWG file format.  AECNews has a good article with details. Rob Rodriguez has started an ...

Machine designers will LOVE the new Belt/Chain features in SolidWorks 2007.  The days of sketching arcs and lines to simulate a belt could be over ...