Unless you have been living under a rock or haven’t been keeping up with the latest SolidWorks News, you have probably heard that with SolidWorks 2008 comes a new User Interface.  I choose my words carefully here because it is not a COMPLETE overhaul, but there has been some significant change nonetheless.

Lets talk about what you will see when you fire up SolidWorks 2008.  Probably the first thing you will notice is the lack of a menu bar.  Don’t worry….it is still there.  To activate it select the SolidWorks Icon in the top left corner of the window and the menu bar flies out to the right.  If you like the menu bar and you don’t want it hidden, there is a “push pin” that can be activated to show it all the time.  A redesigned version of the Standard toolbar is provided at the top of the screen next to the SolidWorks icon.  The toolbar has been shortened with the introduction of more flyout options for common commands.  Toolbar buttons (but not complete toolbars) can be added to this area through the Tools->Customize command.  The part name is now displayed at the top center part of the screen and the search command window is located towards the top right.

Moving down you’ll notice a completely new CommandManager.  Rather than having “identity” icons located on the left side of the toolbar as in previous versions, SolidWorks has opted to go with a tab interface to help select between available toolbars.  The tabs are located just below the CommandManager toolbar area.  I absolutely LOVE this feature.  It is now much easier to switch between toolbar sets.  This enhancement should help both veteran users and new users alike.  You may have noticed in the above screen shot a rather odd CommandManager tab.  There is one called “Ricky’s Stuff”.  This demonstrates the ability to create custom tabs within the CommandManager.  You can put ANY combination of toolbar buttons and toolbar flyouts anywhere you want in your custom toolbar or any other toolbar!  The settings for toolbars shown are still stored separately for part, assembly, and drawing documents. 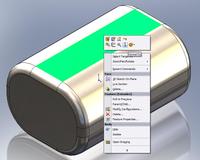 When you venture into the graphics area there are several changes to the Right Mouse Button (RMB) menu.  The menu continues to be context sensitive in that it displays options based on the item(s) selected.  The biggest thing that most of you will notice is that the most common commands have been separated in an “icon only” portion of the RMB menu at the top called the Context Toolbar.  This is indeed one of the parts that take some getting used to.  I found myself pretty comfortable with it after about 8 hours of usage and very comfortable with it after using it 2 or 3 days.  The icons are pretty similar if not the same as what was presented in SolidWorks 2007 for the most part.  If you find yourself not remembering one of them a quick hover with the mouse produces an almost instantaneous tooltip.  The only part of this I don’t like as much is that the Context Toolbar is not customizable.  I have found that the toolbar buttons placed in this area are indeed the most commonly used, so thus far I haven’t seen this as much of a problem.

The Context Toolbar is also available with a left click to a model face or FeatureManager Design Tree item.  The great thing about this is that the way it is designed, it doesn’t get in your way!  A left click on the previously mentioned entities produces the Context Toolbar up and to the right of your selection.  The entire toolbar appears transparent at first.  It will solidify if you move the mouse towards it.  If you move the mouse away from it, it disappears.

Another nice enhancement is the introduction of the Shortcut Bar.  This is a group of toolbar buttons that by default is brought up by pressing the “S” key.  The beauty of this is that the Shortcut Bar is

Another difference you might have noticed is the absence of the view flyout button bar in the bottom left corner of the screen.  This has been replaced with the Heads-up View Toolbar. It is located at the top of the graphics area in the center.  It has transparency effects and doesn’t get in the way which is what I thought it would do when I first saw it. A few of the view commands along with the Section View, Display Style, View Orientation, Hide/Show Items, Scenes, & View Settings have all been moved to this area.  You cannot hide or customize this toolbar. If you are in a Part or Assembly, the view “status” is now displayed in the lower left corner under the orientation triad.

In the lower right corner of the screen there is an icon that is shaped like a tag.  Clicking on this icon activates the Tags feature.  Tags are keywords that can be assigned to SolidWorks features or entire documents that allow for easy filtering and searching.  If you select a face (selects the feature) or a feature in the FeatureManager and then activate the Tag icon, you may then enter your keyword that you wish to assign to that item. 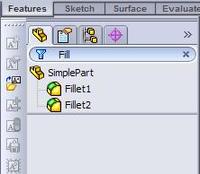 Speaking of filtering, there is a new Filter bar that has been added near the top of the FeatureManager Design Tree.  This allows you to quickly filter the FeatureManager by feature name or by tags.  The filter works as you type each character into the filter field.  Other enhancements in this area include the ability to Hide/Show FeatureManager Items such as the Design Binder or Equations Folder. There are several options in the System Options area that control how items are hidden and shown by default.  I like the “Automatic” option that can be set to only show an item if it is present in the document.

That pretty much sums up the major changes to the User Interface.  I’d like to throw something out there for all the users to think about.  Don’t criticize the new User Interface until you get some time to try it.  Yes, it is different and for some people any kind of change is met with resistance.  It is my opinion that most of the changes will have a positive effect on your overall experience in SolidWorks. I would give yourself at least 16 hours of use and then see how you like it.  I’m not saying that everyone will agree with me on this one, but I for one really like the changes and have found myself already wishing I had them in SolidWorks 2007.

There were some SERIOUS enhancements to the graphics (specifically Realview) in SolidWorks 2008. Because of the depth of changes, I will cover that in a separate review.

That’s all for now. Stay tuned…MUCH MORE to come on SolidWorks 2008!

Tweet
Pin It
POSTED IN » All, Modeling, SolidWorks Reviews

Gearing up for SolidWorks 2010

This week I was fortunate enough to take a trip up to SolidWorks headquarters with several other Bloggers to see first hand the new features ...

The SolidWorks World 2008 website is now LIVE!  Next year’s conference will be held in sunny San Diego, CA.  The conference dates are January 20-23, ...