During the SolidWorks 2013 deep dive demo last week at the Dassault Systemes North American headquarters, the SolidWorks staff sprung a little surprise on us.  When we came back from one of our breaks, there was a Samsung 700T Tablet sitting on one of the tables.  It was plugged up to a dock that had a keyboard and mouse attached to it.  This Tablet was running full up Windows 8….and it was running SolidWorks 2013!  (See the image below) 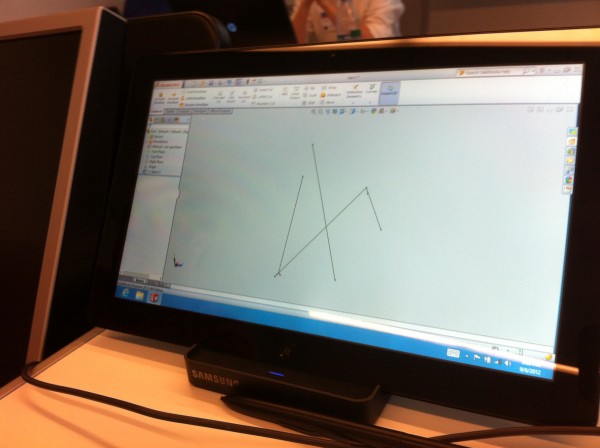 Now this little wonder certainly captivated everyone in the room in fact…there were so many eyes on it, the demos stopped…and we talked about nothing else but the Tablet for about the next 15 minutes.  SolidWorks 2013 is on track to be certified for Windows 8 at the SP0 release.  So if you can get your hands on a tablet that can run Windows 8, then you can potentially run SolidWorks!

This particular tablet was running in Software OpenGL mode, but I was quite impressed with how snappy the graphics were.  According to the folks at SolidWorks, the recently announced Microsoft Surface Pro that includes an Ivy Bridge processor will have an integrated video card that will be capable of enabling RealView in SolidWorks.

How capable it will be in running SolidWorks remains to be seen.  Given the fact that it has a lightning fast processor, capable video, and a keyboard and mouse that have already been announced, it looks like all the tools are there to potentially make this a legitimate SolidWorks setup.

This is a very intriguing concept….Stay tuned on this….as more details become available…I’ll post them.

A few weeks back SolidWorks announced the purchase of GCS Scandinavia AB of Sweden, the makers of Conisio PDM/PLM software.  Eighteen days later a second ...

For the third year in a row, I got to participate in a Breakout Session Presentation at SolidWorks World.  Today was not only the start ...