Ever since the “S” key shortcut command was added in SolidWorks 2008, I’ve heard some users comment that they use it quite often.  This lead me to question whether or not you could function inside of SolidWorks in an efficient manner by JUST using the “S” key shortcut menu.  NO CommandManager.  NO Toolbars.  Just in case you aren’t familar with the “S” key menu, you simply press the “S” key on the keyboard and the menu appears in close proximity to your cursor.  Since the “S” Key menu can be completely customized, I have decided to test this out by adding my most common commands to this menu.  The menu is context sensitive.  For example, when modeling parts, you have a specific menu for Edit Part mode and a completely different menu when in Edit Sketch mode.  After some customization of both previously mentioned menus, I set out for my first modeling experiment in the below video.  What I am modeling is not important.  The important part of this experiment was to see how easy it was to depend mostly on the “S” Key menu.  You can access the video by clicking on the image below. 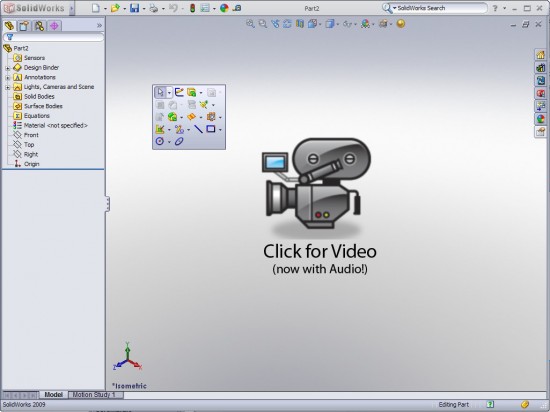 This post will be the first of a few more on the subject of the “S” Key Experiment.  I will include posts in the future that utilize the “S” Key menu in the Assembly and Drawing environments along with some updates on my testing in the Part Environment.

For the first time ever, a SWUGN Summit was held in Nashville, TN today and SolidWorks users from across the region were there in record ...

SolidWorks 2008 SP0 Early Visibility is now available for download at the Customer Portal.  This of course means that First Customer Ship (FCS) is right ...