OK…almost a week now and no posts?  I have a good excuse.  🙂 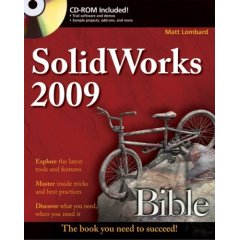 Back in June Matt Lombard asked me to be the Technical Editor for his upcoming SolidWorks 2009 Bible.  Having never worked directly on a project with Matt nor on a book of this size, I thought it was a great opportunity and gladly accepted his offer.  Even though this was only an update to the 2007 Bible, 1100 pages and two software revisions has proven to be quite a bit of work.  Its a great way to dig into MANY of the details of SolidWorks 2009 and also provide some additional support for what is already the most complete book on SolidWorks ever produced.

It has proven to be what I thought it was.  An enjoyable but time consuming task.  This is actually the second SolidWorks book I have been Technical Editor on.  The first book was the SolidWorks for Dummies, 2nd Edition authored by Richard Doyle, so I pretty much knew what I was getting into.

The early release from the SolidWorks 2009 NDA combined with the launch of my new site got me a little behind on my technical editing but I am happy to report that after a BUNCH of work this past week I’m back on target and only have a few sections to finish.  I have been VERY impressed with what Matt has added to the book and I highly encourage you to check it out when it is released.  No…this is NOT a paid advertisement.  🙂

Make sure you check out The SW Geek’s contest where you could win a 2009 Bible.

I should be able to roll out a few posts before going on a fun filled week long vacation to Disney World on September 12th.  If you follow me on Twitter, I’ll be posting from all around the Disney parks the whole time I am there.

I added some additional notes and links to photos tonight to the previous post on the Knoxville User Group Meeting that I attended last night.  ...

There has been some recent blog traffic regarding Catia & SolidWorks and how the two programs still cannot exchange native data. This has been a ...